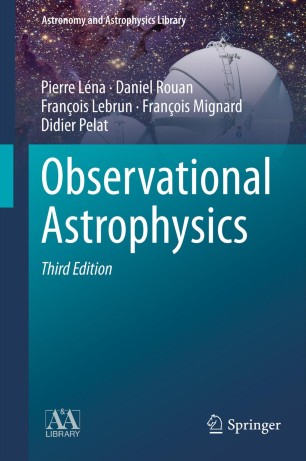 This is the updated, widely revised, restructured and expanded third edition of Léna et al.'s successful work Observational Astrophysics. It presents a synthesis on tools and methods of observational astrophysics of the early 21st century. Written specifically for astrophysicists and graduate students, this textbook focuses on fundamental and sometimes practical limitations on the ultimate performance that an astronomical system may reach, rather than presenting particular systems in detail.
In little more than a decade there has been extraordinary progress in imaging and detection technologies, in the fields of adaptive optics, optical interferometry, in the sub-millimetre waveband, observation of neutrinos, discovery of exoplanets, to name but a few examples.
The work deals with ground-based and space-based astronomy and their respective fields. And it also presents the ambitious concepts behind space missions aimed for the next decades. Avoiding particulars, it covers the whole of the electromagnetic spectrum, and provides an introduction to the new forms of astronomy becoming possible with gravitational waves and neutrinos. It also treats numerical aspects of observational astrophysics: signal processing, astronomical databases and virtual observatories.