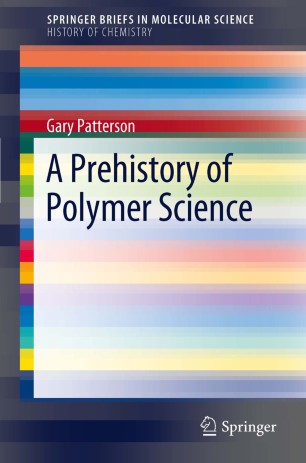 A Prehistory of Polymer Science

Polymer science is now an active and thriving community of scientists, engineers and technologists, but there was a time, not so long ago, when there was no such community. The prehistory of polymer science helps to provide key insights into current issues and historical problems. The story is divided into an ancient period, from Greek times to the creation of the molecular consensus, a nascent period, from Dalton to Kekule to van’t Hoff, and a period of paradigm formation and controversy, from Staudinger to Mark to Carothers. The prehistory concludes with an account of the epochal 1935 Discussion of the Faraday Society on “Polymerization.” After this meeting an active community engaged in trying to solve the central problems defined by the discussions.

Gary Patterson is Professor of Chemical Physics and Polymer Science at Carnegie Mellon University. He received his Ph.D. in Physical Chemistry under Paul Flory at Stanford University in 1972. He was a Member of Technical Staff in the Chemical Physics Department at AT&T Bell Laboratories from 1972-1984. He is a Fellow of the Royal Society of Chemistry and the American Physical Society. He received the National Academy of Sciences Award for Initiatives in Research in 1981 for his work on light scattering from polymers. He is the author of more than 100 papers on polymer science and the book, “Physical Chemistry of Macromolecules.” He was the Charles Price Fellow of the Chemical Heritage Foundation and currently is the Chief Bibliophile of the Bolton Society.