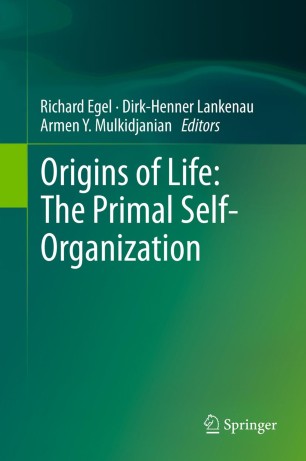 Origins of Life: The Primal Self-Organization

If theoretical physicists can seriously entertain canonical “standard models” even for the big-bang generation of the entire universe, why cannot life scientists reach a consensus on how life has emerged and settled on this planet?  Scientists are hindered by conceptual gaps between bottom-up inferences (from early Earth geological conditions) and top-down extrapolations (from modern life forms to common ancestral states). This book challenges several widely held assumptions and argues for alternative approaches instead. Primal syntheses (literally or figuratively speaking) are called for in at least five major areas. (1) The first RNA-like molecules may have been selected by solar light as being exceptionally photostable. (2) Photosynthetically active minerals and reduced phosphorus compounds could have efficiently coupled the persistent natural energy flows to the primordial metabolism. (3) Stochastic, uncoded peptides may have kick-started an ever-tightening co-evolution of proteins and nucleic acids.  (4) The living fossils from the primeval RNA World thrive within modern cells.  (5) From the inherently complex protocellular associations preceding the consolidation of integral genomes, eukaryotic cell organization may have evolved more naturally than simple prokaryote-like life forms. – If this book can motivate dedicated researchers to further explore the alternative mechanisms presented, it will have served its purpose well.