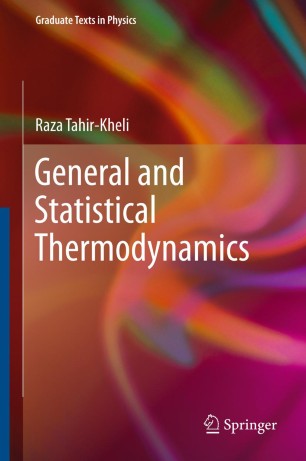 This textbook explains completely the general and statistical thermodynamics. It begins with an introductory statistical mechanics course, deriving all the important formulae meticulously and explicitly, without mathematical short cuts. The main part of the book deals with the careful discussion of the concepts and laws of thermodynamics, van der Waals, Kelvin and Claudius theories, ideal and real gases, thermodynamic potentials, phonons and all the related aspects. To elucidate the concepts introduced and to provide practical problem solving support, numerous carefully worked examples are of great value for students. The text is clearly written and punctuated with many interesting anecdotes. This book is written as main textbook for upper undergraduate students attending a course on thermodynamics.

“Tahir-Kheli … is to be commended for covering a wide array of thermodynamics topics ranging from classical to statistical subjects. … He engages the reader with many well-stated exercises followed by detailed solutions. … a must for science and engineering graduate students engaged in theoretical and experimental thermodynamics and statistical mechanics research; it solidly provides a wide range of relationships that may be pivotal in that field and other related areas such as biophysics and bioengineering. Summing Up: Highly recommended. Graduate students through professionals.” (R. N. Laoulache, Choice, Vol. 50 (7), March, 2013)
Buy options