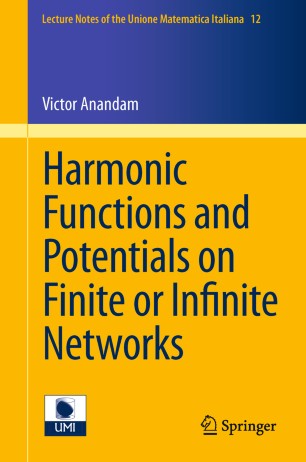 Harmonic Functions and Potentials on Finite or Infinite Networks

Random walks, Markov chains and electrical networks serve as an introduction to the study of real-valued functions on finite or infinite graphs, with appropriate interpretations using probability theory and current-voltage laws. The relation between this type of function theory and the (Newton) potential theory on the Euclidean spaces is well-established. The latter theory has been variously generalized, one example being the axiomatic potential theory on locally compact spaces developed by Brelot, with later ramifications from Bauer, Constantinescu and Cornea. A network is a graph with edge-weights that need not be symmetric. This book presents an autonomous theory of harmonic functions and potentials defined on a finite or infinite network, on the lines of axiomatic potential theory. Random walks and electrical networks are important sources for the advancement of the theory.

“In this book a potential-theoretic style of the theory is built into the framework of finite or infinite networks. The motivation of the book is to build a function theory on networks reflecting ideas of potential theory on locally compact spaces. … The book is written in a reader-friendly way and contains various potential-theoretic results … .” (Sirkka-Liisa Eriksson, Zentralblatt MATH, Vol. 1239, 2012)

“The book under review is a treatise of the potential theory on a network, that is, a graph with edge weights that need not be symmetric. … Besides being a very useful resource on the current important developments of the subject, this book has the potential even to change the mindset of those who are vocal critics of axiomatic potential theory, which is viewed by some as an abstruse and unappealing field.” (Flavia Colonna, Mathematical Reviews, Issue 2012 h)