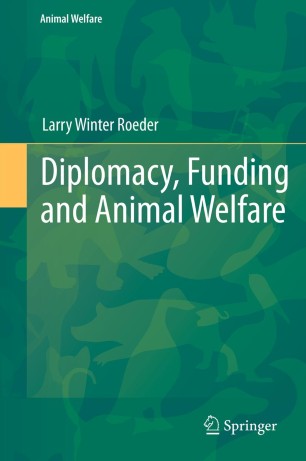 Diplomacy, Funding and Animal Welfare is a practical guide to the best diplomatic and negotiation practices needed to convince governments and international institutions to effectively protect animals, which also introduces new approaches to fundraising.  Animal protection advocates are prepared for speaking to diplomats and government officials in any setting, and to combatants in war zones.  The book mainly focuses on approaching local and national governments, the United Nations system, the international Red Cross movement and systems related to other international organizations that can help animals, often in surprising ways.

The reader will learn the rules of “diplomatic protocol", and much about the rules and procedures of major international bodies.  To provide balance and real world relevance, the guide draws on a compilation of the author’s extensive activities across a range of development, animal welfare, emergency management and climate issues in government and in the NGO world, as well as interviews with scholars and officials from NGOs, diplomatic missions, the United Nations, the Red Cross, governments and corporations.

Mr.  Roeder served for over thirty five years in the United States government, mostly in the US Department of State, retiring in 2005 as their Policy Adviser on Disaster Management in the Bureau of International Organization Affairs.  He also served in the US Army, the Multinational Forces and Observers (an International Organization in Sinai, Egypt) and on seconded duty to the European Commission.  Mr. Roeder is the son of an American diplomat and thus has spent virtually his entire life in the world of diplomacy, often working with heads of government or Minister rank government officials, with his main focus being the negotiation of international agreements in economic affairs, climate change, human rights, weapons reduction, trade or emergency management.  He also has extensive experience in emergency operations and served in a number of major crises, both during his service in the US government and after.  While serving in Egypt, Mr. Roeder witnessed a camel being burned alive and decided to devote his training to ending animal cruelty, especially to livestock and wild-life.  He often recommended to the United Nations, the US Government and other governments to be more proactive protecting animals.  In 2005, following the Katrina Disaster, he became the UN Affairs Director for the World Society for the Protection of Animals (WSPA) where he focused on international agreements, and on convincing the United Nations and the international Red Cross movement to protect animals.  He left that post in 2009 to become a private contractor, and in 2010 assisted NGOs rescuing animals in Haiti, and also met with the President of Somaliland on economic development, and feral dog, livestock and wildlife protection.

Mr. Roeder is now a licensed wildlife rehabilitator in the State of Virginia in the United States and serves in a volunteer capacity as Editor in Chief, the Climate Caucus Network, an NGO alliance based in New York.  He is married, with one son, and is also a portrait artist.

“‘A practical guide to the best diplomatic and negotiation practices needed to convince governments and international institutions to effectively protect animals, which also introduces new approaches to fund-raising’ … . on finishing the book, I was left with the impression of having had a number of personal conversations with a very interesting author covering his unique, wide-ranging experiences, and being able to take several ideas and practical tips to blend with other sources for furthering high-level international animal welfare policy.” (Joy Pritchard, Animal Welfare, Vol. 21 (4), November, 2012)