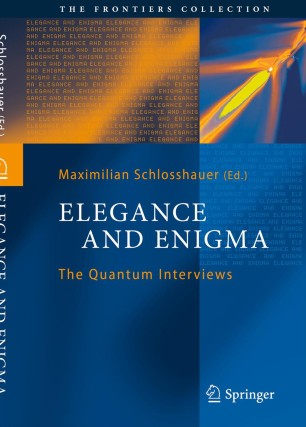 Quantum mechanics is one of mankind's most remarkable intellectual achievements. Stunningly successful and elegant, it challenges our deepest intuitions about the world. In this book, seventeen physicists and philosophers, all deeply concerned with understanding quantum mechanics, reply to Schlosshauer's penetrating questions about the central issues. They grant us an intimate look at their radically different ways of making sense of the theory's strangeness. What is quantum mechanics about? What is it telling us about nature? Can quantum information or new experiments help lift the fog? And where are we headed next? Everyone interested in the contemporary but often longstanding conundrums of quantum theory, whether lay reader or expert, will find much food for thought in these pages. A wealth of personal reflections and anecdotes guarantee an engaging read.

Maximilian Schlosshauer is a senior research fellow at the Institute for Quantum Optics and Quantum Information in Vienna. He was inspired to study physics - and in particular quantum physics - after reading Heisenberg's "Physics and Philosophy" and Schrödinger's "Nature and the Greeks" as a high-school student. Having earned a Ph.D. from the University of Washington for work on the foundations of quantum mechanics, he continued his research as a postdoctoral fellow at the universities of Queensland and Melbourne, Australia, and at the Niels Bohr Institute, Copenhagen. Max is the author of "Decoherence and the Quantum-to-Classical Transition" (Springer, 2007). He is passionate about words and music.

“Max Schlosshauer’s latest book is a collection of interviews with seventeen prominent researchers in the foundations of quantum theory. … an entertaining read for a researcher in quantum foundations … . would be much more useful to those working in other fields who want to get a feel for how the main issues in quantum foundations currently stand. It would also be useful for students who are trying to decide whether to do research in quantum foundations, and, once decided, which research program to pursue.” (Matthew S. Leifer, American Journal of Physics, Vol. 80 (3), March, 2012)

“Elegance and Enigma explores the foundations of quantum mechanics through interviews with experts. … Each chapter consists of the responses of all seventeen experts to one of the questions. … This book is best suited for those with some level of experience in quantum mechanics, especially from a physicist’s perspective. For those with less background, it is fruitful ground for dabbling. The editor-interviewer’s comments are accessible and insightful.” (William J. Satzer, MAA Reviews, August, 2012)

“This lively and original book seeks to introduce readers to the field of quantum foundations via a series of 17 questions posed to 17 of its central researchers. … book is a delight to read, and will obviously be enjoyed by others working within and around the philosophy and foundations of physics (the most likely market). I would also recommend the book very highly to graduate students studying the philosophy of physics, to gain a good feel for what makes those in the field tick.” (Dean Rickles, Mathematical Reviews, January, 2013)