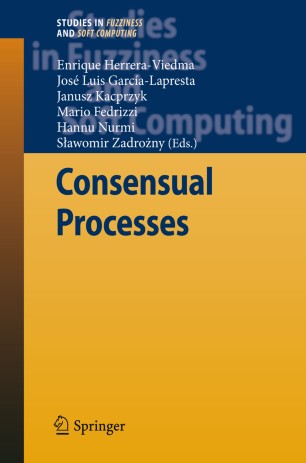 Part of the Studies in Fuzziness and Soft Computing book series (STUDFUZZ, volume 267)

The word consensus has been  frequently used  for centuries, perhaps millenia. People have always deemed it important that decisions having a long lasting impact on groups, countries or even civilizations be arrived at in a consensual manner.  Undoubtedly the complexity of modern world in all its social, technological, economic and cultural dimensions has created new environments where consensus is regarded desirable.  Consensus typically denotes a state of agreement prevailing in a group of agents, human or software.    In the strict sense of the term, consensus means that the agreement be unanimous.  Since such a state is often unreachable or even unnecessary, other less demanding consensus-related notions have been introduced. These typically involve some graded, partial or imprecise concepts. The contributions to this volume define and utilize such less demanding - and thus at the same time more general - notions of consensus.  However, consensus can also refer to a process whereby the state of agreement is reached.  Again this state can be something less stringent than a complete unanimity of all agents regarding all options. The process may involve modifications, resolutions and /or mitigations of the views or inputs of individuals or software agents in order to achieve the state of consensus understood in the more general sense.   The consensus reaching processes call for some soft computational approaches, methods and techniques, notably fuzzy and possibilistic ones. These are needed to accommodate the imprecision in the very meaning of some basic concepts utilized in the definition of consensus as a state of agreement and as a process whereby this state is to be reached. The overall aim of this volume is to provide a comprehensive overview and analysis of the issues related to consensus states and consensual processes.