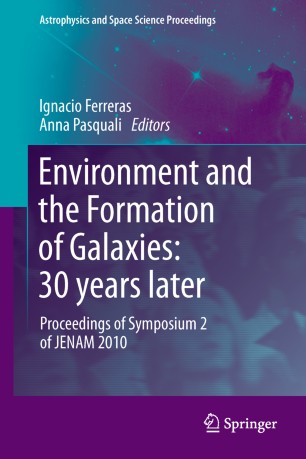 Environment and the Formation of Galaxies: 30 years later

Proceedings of Symposium 2 of JENAM 2010

The publication of the morphology - density relation by Alan Dressler in 1980 brought into the limelight the role played by environment in the formation and evolution of galaxies. The symposium Environment and the Formation of Galaxies: 30 years later, was organised with the purpose of establishing the environmental impact on the evolution of galaxies and its dependence on look-back time. Special emphasis was placed on the physical mechanisms that are responsible for transforming galaxies once they are accreted by a group or a cluster, including the observable imprint left in the galaxy HI distribution.

Other major topics of the symposium were the environmental dependence of galaxy properties at z ≥ 1 and the implementation of environmental effects in cosmological models of galaxy formation and evolution.

This book presents the edited proceedings of this stimulating meeting.