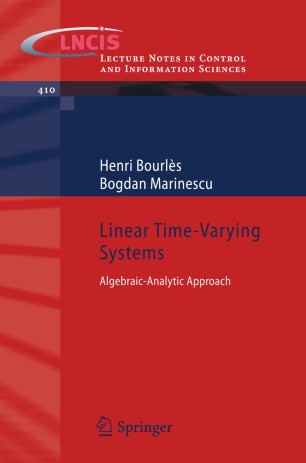 The aim of this book is to propose a new approach to analysis and control of linear time-varying systems.  These systems are defined in an intrinsic way, i.e., not by a particular representation (e.g., a transfer matrix or a state-space form) but as they are actually.  The system equations, derived, e.g., from the laws of physics, are gathered to form an intrinsic mathematical object, namely a finitely presented module over a ring of operators.  This is strongly connected with the engineering point of view, according to which a system is not a specific set of equations but an object of the material world which can be described by equivalent sets of equations.  This viewpoint makes it possible to formulate and solve efficiently several key problems of the theory of control in the case of linear time-varying systems.  The solutions are based on algebraic analysis.

This book, written for engineers, is also useful for mathematicians since it shows how algebraic analysis can be applied to solve engineering problems.

Henri Bourlès is a Professor and holds the industrial automation chair at the Conservatoire national des arts et métiers in France. He has been teaching automation for over 20 years in engineering and graduate schools.

“This nice book introduces an algebraic-analytic approach for studying linear time-varying (LTV) systems. … may be useful for anyone interested in algebraic approaches of systems theory. … Non-mathematicians will find a clear and well-written presentation of the mathematical background in the first part of this book, which certainly increases its readability. The material of the second and third parts is also interesting for mathematicians, who will find a precise presentation of applications of these algebraic methods to systems theory.” (Paulo Sérgio Pereira da Silva, Mathematical Reviews, Issue 2012 c)
Buy options