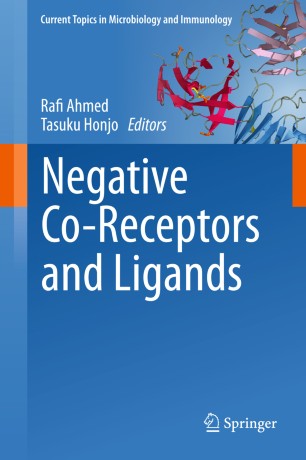 Adaptive immune responses serve as a key defense mechanism for the control of infections in vertebrates. Immune responses must be of sufficient strength to contain invading pathogens, antigen specific responses require regulatory mechanisms to ensure termination or downmodulation to avoid excessive damage to the host tissue. For both branches of the adaptive immune system, regulatory molecules i.e. coreceptors and ligands have been identified that control the signaling cascades initiated by engagement of the T cell and B cell antigen receptors. This book describes biological functions as well as molecular mechanisms of these molecules. Fc Receptor-Like molecules (FCRL) that have garnered increasing interest due to their differential patterns of lymphocyte expression and potential involvement in the pathogenesis of autoimmune disorders, immunodeficiency and lymphoid malignancies in humans. Programmed cell death-1 (PD-1) delivers negative signals upon interaction with its two ligands, PD-L1 or PD-L2. The biological significance of PD-1 and its ligand suggest the therapeutic potential of manipulation of PD-1 pathway against various human diseases. TIM-3 acts as a negative regulator of Th1/Tc1 cell function by triggering cell death upon interaction with its ligand, galectin-9. This negative regulatory function of TIM-3 has now been expanded to include its involvement in establishing and/or maintaining a state of T cell dysfunction or ‘exhaustion’ observed in chronic viral diseases. The Ly49 receptors, which are expressed in a stochastic manner on subsets of murine Natural Killer (NK) cells, T cells, and other cells, are encoded by the Klra gene family and include receptors with either inhibitory or activating function. Most of the inhibitory Ly49 receptors recognize polymorphic epitopes on major histocompatibility complex (MHC) class I proteins as ligands. Fc-receptors for IgG (FcRs) are widely expressed on innate immune effector cells in mediating the protective function of IgG. This book discusses how the interaction of these different ligands to classical and novel Fc-receptors influences the immune response and which strategies microorganisms have developed to prevent them. The host derived cytokine IL-10 is a key player in the establishment and perpetuation of viral persistence.  This book covers the role of IL-10 in viral persistence and explores the exciting prospect of therapeutically blocking IL-10 to increase antiviral immunity and vaccine efficacy. TGF-ß inhibits the proliferation of T cells as well as cytokine production via Foxp3-dependent and independent mechanisms. Recent studies suggest that Smad2 as well as Smad3 play essential roles in Foxp3 induction and cytokine suppression, whereas Th17 differentiation is promoted via the Smad-independent pathway. Mutual suppression of signaling between TGF-ß and inflammatory cytokines has been shown to be necessary for the balance of immunity and tolerance.