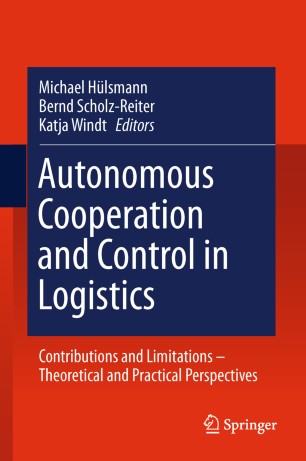 Autonomous Cooperation and Control in Logistics

Michael Hülsmann studied Business Administration at the University of Bayreuth. Then he continued as a Research Assistant at the University of Bayreuth and at the University of Bremen. He earned a PhD degree on the topic „Management im Orientierungsdilemma – Notwendigkeit eines Managements rationalitätsbezogener Widersprüche von Effizienz und Nachhaltigkeit“ (Orientational Dilemma in Management - The Need for a Rationality Driven Contradiction Between Efficiency and Sustainability in Management) with „summa cum laude“ and received the 2nd award for studies of the Förderverein für Mittelstandsforschung e.V. (Association for Scientific Development of Small and Medium Enterprises). In his business career Prof. Hülsmann worked for notable companies. Between 2003 and 2009 Prof. Hülsmann was in charge of the „Management nachhaltiger Systementwicklung“ (Management of Sustainable Systems Development) field of studies in the Economics department of the University of Bremen. Since January 2004 he has been in charge of sub-project A3 „Monitoring der Selbststeuerung“ („Monitoring of Autonomous Control“) and a leading member of SFB 637 „Selbststeuerung logistischer Prozesse – ein Paradigmenwechsel und eine Grenzen“ (Autonomous Logistics Processes - a Change in Paradigm and Constraints) which is already in its second research level as the kernel of the scientific cluster „Dynamics in Logistics“. In 2007 Prof. Hülsmann was invited as a visiting researcher at the University of California, Los Angeles, USA. In March 2009 he took over the „System Management“ fi eld of studies at the School of Engineering and Science at Jacobs University Bremen. He focuses on Strategic Management of Logistics Systems. Prof. Hülsmann teaches and does research mainly in the fields of competence and technology based positioning, accomplishing of technological change in value-adding networks and setting-up of interorganizational coordination mechanisms. Bernd Scholz-Reiter was founder and head of the Fraunhofer Application Center for Logistics Systems Planning and Information Systems at Cottbus. Since November 2000 he is a full professor and chair holder of the chair of Planning and Control of Production Systems (PSPS) at the University of Bremen where he also serves as director of the Bremen Institute of Industrial Technology and Applied Work Science (BIBA). He was initiator and vice-speaker of the research group on Autonomous Control of Logistic Processes, speaker of the Bremen Research Cluster for Dynamics in Logistics as well as speaker of the International Graduate School for Dynamics in Logistics. Scholz-Reiter is an ordinary member of the Berlin-Brandenburg Academy of Sciences and Humanities, an ordinary member of acatech, the Council for Engineering Sciences at the Union of the German Academies of Sciences and Humanities; BESIDE OTHER NATIONAL MEMBERSHIIPS he is a member of CIRP, the International Institution for Production Engineering Research, a fellow of the European Academy of Industrial Management (AIM) and an Advisory Board member of the Schlesinger Laboratory at TECHNION - Israel Institute of Technology, Haifa, Israel, as well as a member of the Scientific Advisory Board of the German Logistics Association (BVL). Professor Scholz-Reiter serves as vice president of the German Research Foundation (Deutsche Forschungsgemeinschaft, DFG). He is editor of the professional journals Industrie-Management and PPS-Management and member of the editorial board of the scientific International Journal Production Planning & Control. He is author and co-author of more than 250 scientific publications. Katja Windt, born in 1969, studied mechanical engineering with a focus on production at the Leibniz University Hannover and at the Massachusetts Institute of Technology in the U.S.. After her doctorate at the Institute for Production Systems and Logistics (IFA) in Hanover in 2000, she moved to the University of Bremen. There, she worked as a department head at the Institute for Production and Logistics (BIBA) and is still active part in the special research project "Autonomous Cooperating Logistic Processes". In February 2008 she was appointed to a professorship for "Global Production Logistics" to the private Jacobs University Bremen.