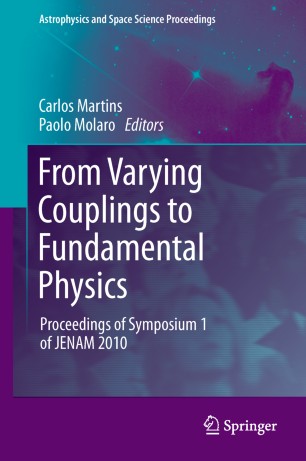 From Varying Couplings to Fundamental Physics

Proceedings of Symposium 1 of JENAM 2010

Nature is characterized by a number of physical laws and fundamental dimensionless couplings. These determine the  properties of our physical universe, from the size of atoms, cells and mountains to the ultimate fate of the universe as a whole. Yet it is rather remarkable how little we know about them. The constancy of physical laws is one of the cornerstones of the scientific research method, but for fundamental couplings this is an assumption with no other justification  than a historical assumption. There is no 'theory of constants' describing their role in the underlying theories and how they relate to one another or how many  of them are truly fundamental.

Studying the behaviour of these quantities throughout the history of the universe is an effective way to probe fundamental physics. This explains why the ESA and ESO include varying fundamental constants among their key science drivers for the next generation of facilities. This symposium discussed the state-of-the-art in the field, as well as the key developments anticipated for the coming years.