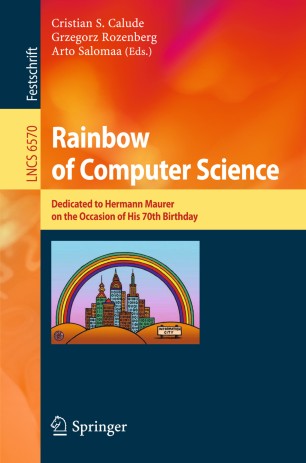 Dedicated to Hermann Maurer on the Occasion of His 70th Birthday

This book is dedicated to Hermann Maurer on the occasion of his 70th birthday. The title word Rainbow reflects the beauty and variety of the achievements of this outstanding scientist, and also the diversity and depth of current research in computer science. The high admiration that Professor Maurer enjoys in the computer science community all over the world was witnessed by the enthusiastic response received to the request to contribute to this book. The contributors are leading researchers, also representing the diversity of computer science. The research areas included in the book range from Automata, Formal Languages and Computability to various aspects of the Practice of Computer Science, as well as from Algorithmics to Learning. The book consists of a brief Preface describing the achievements of Professor Maurer, followed by twenty articles roughly grouped together according to their topics. Most of the articles are written in a style understandable to a wider audience. The book is useful to anyone interested in recent developments in computer science.