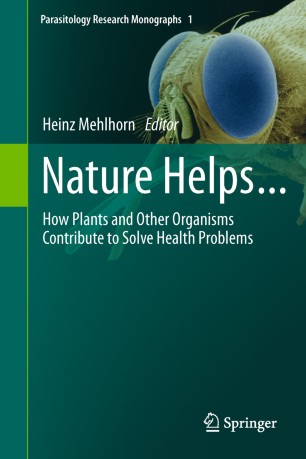 How Plants and Other Organisms Contribute to Solve Health Problems

Nature helps... of course at first itself by developing measures that give bacteria, fungi, plants and animals a chance to be successful in their struggle for life. As a latecomer on Earth, Homo sapiens was gifted with some droplets of the divine spirit of recognition and thus became able to observe, to analyse and recombine skills of other living beings and to use them for his overwhelming career over the last 10,000 years.

Of course fungi, plants, animals and even bacteria were primarily used by mankind as food or as lifestyle products such as beer, but soon it became clear that there was much more potential hidden in these organisms and that they could be used for other purposes, too. Extracts of plants and fungi were recognized as powerful remedies, as medicines, as insecticides or acarizides, as repellents against parasites or even as weapons, e.g. when poisonous compounds from frogs or plants were applied to arrowheads.

Over the last 110 years the pharmaceutical industry has often simulated nature by analyzing complex organic substances taken from living organisms and then producing by synthesis absolutely pure compounds, which mostly consisted of only one single active substance. These products had the advantage of acting against precisely one target and thus produced fewer possible side effects than the complex plant extracts.

However, the more serious side effect was that disease agents could develop resistances to pure medicinal products much more easily. Thus after 70 years of excellent prospects for chemotherapy, some dark clouds appeared and quickly gathered, so that several therapeutic remedies now no longer work.

Therefore in many countries - especially in those where the pure chemotherapeutics are too expensive for the poor population - the cry “back to nature” is becoming louder and louder. This has led to an enormous increase of studies that again use natural extracts as remedies in the fight against diseases.

The present book summarizes examples of promising aspects in a broad spectrum of applications and shows how extracts derived from bacteria, marine organisms, plants or even animals may help to treat infectious diseases, how such organisms may keep away parasites and pests from the bodies of plants or animals, including humans, and how they can be used directly to aid in diagnosis, promote wound healing and even to help catch criminals.

These 15 chapters offer not only basic research on these different fields, but also show how useful and effective products can be developed from research.

“Mehlhorn (Heinrich Heine Univ., Germany), a leading authority in parasitology, brings the breadth of his experience to this edited collection of reviews. … The first half of the book is devoted to the treatment of parasitic infections. … The second half of the book comprises chapters on how parasitic organisms themselves are used to treat other ills. … Overall, the book offers useful historical, biochemical, social, entomological, agricultural, medical, and ethnobotanical information. Summing Up: Recommended. Upper-division undergraduates, graduate students and researchers/faculty.” (L. Swatzell, Choice, Vol. 49 (5), January, 2012)
Buy options