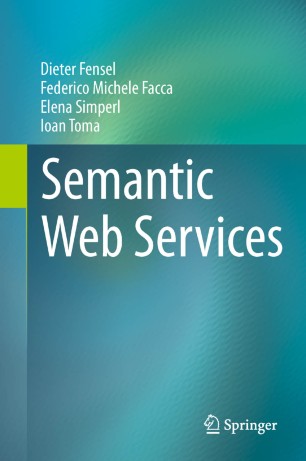 A paradigm shift is taking place in computer science: one generation ago, we learned to abstract from hardware to software, now we are abstracting from software to serviceware implemented through service-oriented computing. Yet ensuring interoperability in open, heterogeneous, and dynamically changing environments, such as the Internet, remains a major challenge for actual machine-to-machine integration. Usually significant problems in aligning data, processes, and protocols appear as soon as a specific piece of functionality is used within a different application context.

The Semantic Web Services (SWS) approach is about describing services with metadata on the basis of domain ontologies as a means to enable their automatic location, execution, combination, and use. Fensel and his coauthors provide a comprehensive overview of SWS in line with actual industrial practice. They introduce the main sociotechnological components that ground the SWS vision (like Web Science, Service Science, and service-oriented architectures) and several approaches that realize it, e.g. the Web Service Modeling Framework, OWL-S, and RESTful services. The real-world relevance is emphasized through a series of case studies from large-scale R&D projects and a business-oriented proposition from the SWS technology provider Seekda.

Each chapter of the book is structured according to a predefined template, covering both theoretical and practical aspects, and including walk-through examples and hands-on exercises.  Additional learning material is available on the book website www.swsbook.org. With its additional features, the book is ideally suited as the basis for courses or self-study in this field, and it may also serve as a reference for researchers looking for a state-of-the-art overview of formalisms, methods, tools, and applications related to SWS.

Dieter Fensel holds a professorship at the University of Innsbruck and is the director of STI Innsbruck, a Computer Science research institute with over 60 employees. He has over 240 publications in the form of scientific books and journals, conferences, and workshop contributions. He has co-organized over 200 conferences and workshops. He has supervised over 40 master and Ph.D. theses and is a recipient of the Carl-Adam-Petri-Award of the Faculty of Economic Sciences from the University of Karlsruhe. His current research interests focus on the development and application of semantics to all areas of Computer Science. Dieter Fensel is also the co-founder and president of the newly established Semantic Technology Institute (STI) International, whose major aim is to establish semantics as a core pillar of modern Computer Science. STI International was the natural progression of DERI International where Dieter Fensel established expedient relationships with major research centers around Europe, Asia and America.

Elena Simperl is currently working as a senior researcher at the STI Innsbruck. Starting from May, 2007, she was appointed to the position of vice director of the institute.
Elena holds a PhD in Computer Science from the Free University of Berlin and had held positions as a research assistant at the Technical University of Munich (2002-2003) and the Free University of Berlin (2003-2007) before joining STI Innsbruck early 2007.
Elena's primary domain of research is Knowledge Engineering. In particular she is interested in user- and business-oriented aspects of ontology building and management, and in methods and paradigms for facilitating and encouraging knowledge sharing and reuse.

“This book benefits from the extensive research track record of the authors combined with experiences gained in three large European projects with a combined budget of over 50M Euros. It is difficult to think of a more useful intellectual source for finding out about the Semantic Web Services area. If you are just embarking on a career as an ICT researcher, you are interested in services and/or semantics, or if you simply wish to catch up on the latest research in the Semantic Web area, then I thoroughly recommend that you read this book.”  - John Domingue, Knowledge Media Institute, The Open University, UK and STI International, Austria

“Fensel … and academic colleagues capture the state of research directed toward moving the Web from its traditional broadcast model into one wherein the Web provides an infrastructure for accomplishing tasks. … Activities of Web standards bodies, university researchers, and commercial proof-of-concept applications constitute the scope of the book. … A reasonable index helps ameliorate the acronym issue. For researchers, the extensive end-of-chapter bibliographies are a particularly valuable contribution. … Summing Up: Recommended. Graduate students and above.” (C. Vickery, Choice, Vol. 49 (4), December, 2011)