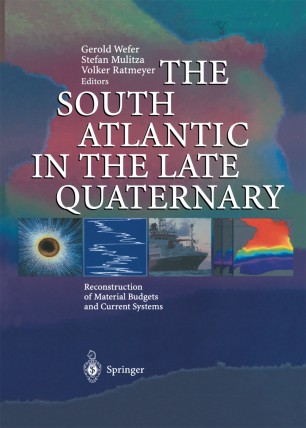 The South Atlantic in the Late Quaternary

The South Atlantic plays a critical role in the couplingofoceanic processes between the Antarctic and the lower latitudes. The Antarctic Ocean, along with the adjacent southern seas, is of substantial importance for global climate and for the distributionofwater masses because itprovides large regions ofthe world ocean with intermediate and bottom waters. In contrast to the North Atlantic, the Southern Ocean acts more as an "information distributor", as opposed to an amplifier. Just as the North Atlantic is influencedby the South Atlantic through the contributionofwarm surface water,the incomingsupply ofNADW - in the area of the Southern Ocean as Circumantarctic Deep Water - influences the oceanography ofthe Antarctic. The competing influences from the northern and southern oceans on the current and mass budget systems can be best studied in the South Atlantic. Not only do changes in the current systems in the eastern Atlantic high-production regions affect the energy budget, they also influence the nutrient inventories, and therefore impact the entire productivity ofthe ocean. In addition, the broad region of the polar front is a critical area with respect to productivity-related circulation since it is the source of Antarctic Intermediate Water. Although theAntarctic Intermediate Watertoday liesdeeper than the water that rises in the upwelling regions, it is the long-term source ofnutrients that are ultimately responsible for the supply oforganic matter to the sea floor and to sediments.