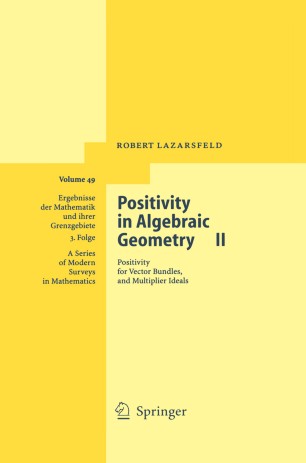 This two-volume book on "Positivity in Algebraic Geometry" contains a contemporary account of a body of work in complex algebraic geometry loosely centered around the theme of positivity. Topics in Volume I include ample line bundles and linear series on a projective variety, the classical theorems of Lefschetz and Bertini and their modern outgrowths, vanishing theorems, and local positivity. Volume II begins with a survey of positivity for vector bundles, and moves on to a systematic development of the theory of multiplier ideals and their applications. At least a third of the book is devoted to concrete examples, applications, and pointers to further developments. Most of the material in the present Volume II has not previously appeared in book form, and substantial parts are worked out here in detail for the first time. Both volumes are also available as hardcover editions as Vols. 48 and 49 in the series "Ergebnisse der Mathematik und ihrer Grenzgebiete."