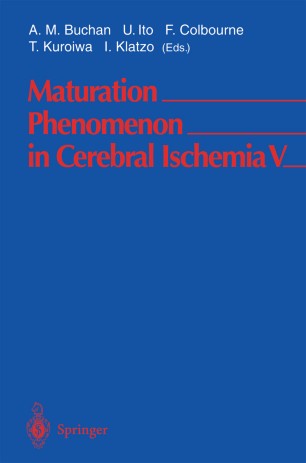 The Maturation Phenomenon, first described by Ito et al. in 1975, refers to post­ ischemic changes that develop hours or days after an ischemic insult. The delayed neuronal death of CAl pyramidal cells of the hippocampus is a classic example. The report of the phenomenon boosted research in the field, as it became evi­ dent that ischemic damage is not a sudden event but a process potentially suscep­ tible to therapeutic intervention. In September 1990, Ito and collaborators organized the First International Sym­ posium on "Maturation Phenomenon in Cerebral Ischemia" which was held in To­ kyo, Japan. The Second Symposium was organized in Tokyo, Japan in March/April 1996. The Third Symposium was held in Pozzilli, Italy in April 1998 and the Fourth Symposium was held in New Orleans, Louisiana, USA in October/Novem­ ber 1999. This book contains the presentations of the Fifth International Workshop on Maturation Phenomenon in Cerebral Ischemia held at the Rimrock Resort Ho­ tel in Banff, Alberta, Canada on April 28-May 1, 2002. It outlines the present sta­ tus of investigations and provides further stimulation for research in this field. The Maturation Phenomenon represents a continuing struggle for survival be­ tween the acceleration of tissue or neuronal death and the activation of defense mechanisms leading to neuronal recovery. The elucidation of these mechanisms is important for developing the ability to manipulate them during a long-lasting "therapeutic window".