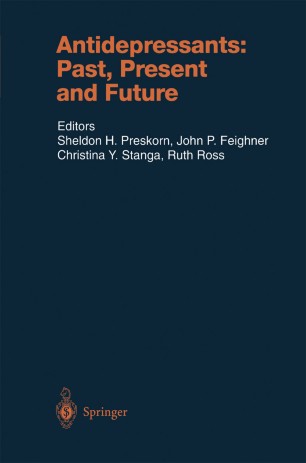 Antidepressants: Past, Present and Future

This book is being published as we mark the end of the first 50 years of the modern antidepressant era. This era began with the chance discovery that tri- clic antidepressants and monoamine oxidase inhibitors had antidepressant p- perties. That discovery had three consequences. First, it brought simple and effective treatment to patients suffering from major depressive illnesses. Second, these discoveries, together with the discovery of lithium and chlorpromazine, began the remedicalization of psychiatry by making it clear that the treatment of many of the major psychiatric illnesses can be approached in the same way as other medical conditions. However, the most far-reaching effect was to provide the first clue as to what mechanisms might underlie antidepressant efficacy, a development that has led to an explosion in the number of available an- depressants and to their widespread use. The goal of this book is to provide a thorough review of the current status of antidepressants—how we arrived at this point in their evolution and where we are going in both the near and the long term. The book employs both a scientific and historical approach to accomplish these goals. The book is intended for practitioners who use antidepressants on a daily basis in their practice as well as for the student and researcher. Each will find that the book provides a comprehensive and logical approach to this important group of medications. The importance of the book is a function of its topic.