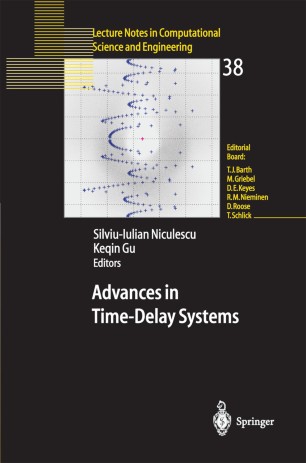 In the mathematical description of a physical or biological process, it is a common practice \0 assume that the future behavior of Ihe process considered depends only on the present slate, and therefore can be described by a finite sct of ordinary diffe­ rential equations. This is satisfactory for a large class of practical systems. However. the existence of lime-delay elements, such as material or infonnation transport, of­ tcn renders such description unsatisfactory in accounting for important behaviors of many practical systems. Indeed. due largely to the current lack of effective metho­ dology for analysis and control design for such systems, the lime-delay elements arc often either neglected or poorly approximated, which frequently results in analysis and simulation of insufficient accuracy, which in turns leads to poor performance of the systems designed. Indeed, it has been demonstrated in the area of automatic control that a relatively small delay may lead to instability or significantly deteriora­ ted perfonnances for the corresponding closed-loop systems.