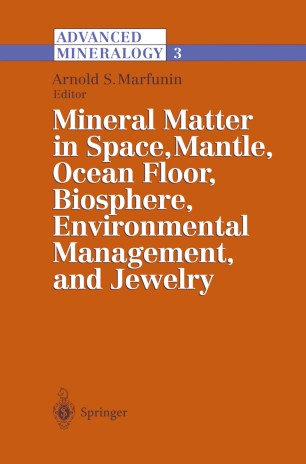 This volume of Advanced Mineralogy encompasses six different areas having two features in common: they are related to one of the largest enterprises of the second half of this century; and represent the ultimate and final extension of the concept of mineral matter. - Understanding mineral matter in Space is one of the principal purposes of cosmic exploration. This includes the results of compa­ rative planetology, lunar epopee, sophisticated meteorite studies (now more than 500 meteorite minerals), discovery of the interstellar mineral dust forming some 60 trillion of earth masses in the Galaxy, and terrestrial impact crater studies. It is possible now to speak of mineralogy of the Universum, and the mineralogical type of the states of matter in the Universe. Direct samples of mantle xenoliths and ultrahigh pressure-tem­ perature experiments make it possible to consider the mineral­ ogical composition of the Earth as a whole, including the upper an lower mantle and the Earth's core. Deep ocean drilling programs, a scientific fleet of hundreds of vessels and several submersibles have brought about great dis­ coveries in the geology, metalogeny, and mineralogy of the ocean floor the largest part of the Earth's surface, in particular revealing new genetic, crystallochemical, and ore types of min­ eral formation.