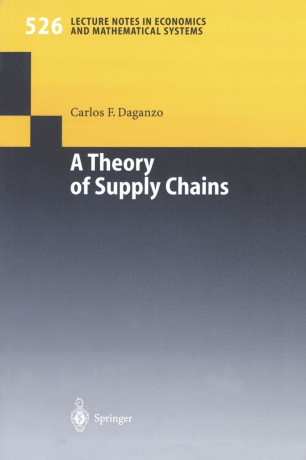 A Theory of Supply Chains

This work was stimulated by a comment made by a former student (Prof. Alan Erera of Georgia Tech) in connection with an inventory stabil­ ity game he was going to play in one of his logistics classes. This was the well-known "beer-game" that is often played in business schools to illus­ trate the "bullwhip" effect in supply chains. Al had said to me that he did not have to tell his students how to reorder replacement parts from the other members of the supply chain because he knew from experience that the order sizes the players would generate as the game progressed would become chaotic anyhow. Since I had not played the beer game, his asser­ tion was intriguing to me. Why would such an unstructured game always lead to the same undesirable effect? Did it have something to do with psy­ chology? What is it that players did to generate instabilities? I posed these to other people but could not get completely satisfactory an­ questions swers. Thus, the bullwhip mystery remained, at least in my mind. Since inventory chains are "conservative" systems analogous to a traffic stream, and since traffic flow models exhibit similar effects (the instability of automobile platoons and of certain numerical methods being two nota­ ble examples)' I suspected that traffic flow theory might shed some light on the puzzle.