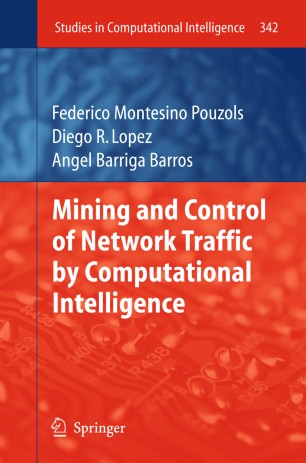 Mining and Control of Network Traffic by Computational Intelligence

As other complex systems in social and natural sciences as well as in
engineering, the Internet is hard to understand from a technical point
of view. Packet switched networks defy analytical modeling. The
Internet is an outstanding and challenging case because of its fast
development, unparalleled heterogeneity and the inherent lack of
measurement and monitoring mechanisms in its core conception.

This monograph deals with applications of computational intelligence
methods, with an emphasis on fuzzy techniques, to a number of current issues in measurement, analysis and control of traffic in the
Internet. First, the core building blocks of Internet Science and
other related networking aspects are introduced. Then, data mining and control problems are addressed. In the first class two issues are
considered: predictive modeling of traffic load as well as
summarization of traffic flow measurements. The second class, control, includes active queue management schemes for Internet routers as well as window based end-to-end rate and congestion control. The practical hardware implementation of some of the fuzzy inference systems proposed here is also addressed. While some theoretical developments are described, we favor extensive evaluation of models using real-world data by simulation and experiments.