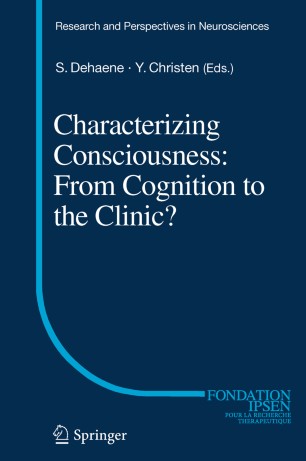 Characterizing Consciousness: From Cognition to the Clinic?

Characterizing the computational architecture and neurobiological mechanisms underlying consciousness is a major unsolved problem in cognitive neuroscience. Yet, thanks to new advances in stimulation paradigms, brain imaging techniques, and neuronal theorizing, the issue now appears to be empirically addressable. In this book thirteen renowned neuroscientists and clinicians examined the most recent data in the field including the possibility to study consciousness in non-human primates. New paradigms now ask whether animals possess meta-cognitive abilities, such as a self-monitoring of their competence in a task, and electrophysiologists now examine the underlying neuronal networks. Many of these results appear compatible with the theory of a global neuronal workspace, which proposes that a distributed set of neurons with long-distance axons are involved in the global information broadcasting underlying reportability and what is experienced as a conscious state.

A major challenge still confronts these novel empirical and theoretical proposals: will they be able to help clinicians confronted with patients in coma or vegetative state? Is a given patient conscious? Will he ever recover consciousness? And what will be his cognitive state if he does? Brain stimulation paradigms, whether cortical or in deep-brain nuclei, can alter the state of consciousness and may improve communication in some 'minimally conscious' patients.