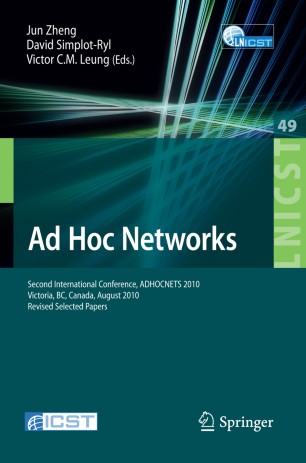 Part of the Lecture Notes of the Institute for Computer Sciences, Social Informatics and Telecommunications Engineering book series (LNICST, volume 49)

Ad hoc networks, which include a variety of autonomous networks for specific purposes, promise a broad range of civilian, commercial, and military applications. These networks were originally envisioned as collections of autonomous mobile or stationary nodes that dynamically auto-configure themselves into a wireless network without relying on any existing network infrastructure or centralized administration. With the significant advances in the last decade, the concept of ad hoc networks now covers an even broader scope, referring to the many types of autonomous wireless networks designed and deployed for a specific task or function, such as wireless sensor networks, vehicular networks, home networks, and so on. In contrast to the traditional wireless networking paradigm, such networks are all characterized by sporadic connections, highly error-prone communications, distributed autonomous operation, and fragile multi-hop relay paths. The new wireless networking paradigm necessitates reexamination of many established concepts and protocols, and calls for developing a new understanding of fundamental problems such as interference, mobility, connectivity, capacity, and security, among others. While it is essential to advance theoretical research on fundamental and practical research on efficient policies, algorithms and protocols, it is also critical to develop useful applications, experimental prototypes, and real-world deployments to achieve an immediate impact on society for the success of this wireless networking paradigm.