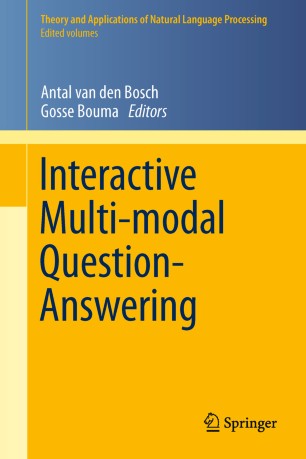 This book is the result of a group of researchers from different disciplines asking themselves one question: what does it take to develop a computer interface that listens, talks, and can answer questions in a domain? First, obviously, it takes specialized modules for speech recognition and synthesis, human interaction management (dialogue, input fusion, andmultimodal output fusion), basic question understanding, and answer finding. While all modules are researched as independent subfields, this book describes the development of state-of-the-art modules and their integration into a single, working application capable of answering medical (encyclopedic) questions such as "How long is a person with measles contagious?" or "How can I prevent RSI?".

The contributions in this book, which grew out of the IMIX project funded by the Netherlands Organisation for Scientific Research, document the development of this system, but also address more general issues in natural language processing, such as the development of multidimensional dialogue systems, the acquisition of taxonomic knowledge from text, answer fusion, sequence processing for domain-specific entity recognition, and syntactic parsing for question answering. Together, they offer an overview of the most important findings and lessons learned in the scope of the IMIX project, making the book of interest to both academic and commercial developers of human-machine interaction systems in Dutch or any other language.

Watch the IMIX movie at www.nwo.nl/imix-film .

"The Netherlands has always been one of the leaders in the general field of Human Language Technology, and IMIX is no exception. It was a very ambitious program, with a remarkably successful performance leading to interesting results. The teams covered a remarkable amount of territory in the general sphere of multimodal  question answering and information delivery, question answering, information extraction and component technologies."

“Researchers in broad disciplines … usually conduct their research by breaking the general problem down into many small problems. … It is rare for many researchers to coordinate their efforts and demonstrate what progress has been made to solve the general problem. This book documents one such effort. … The book is a collection of chapters written by various researchers in the IMIX project. … Anyone who wants to know about the state of the art in question answering will be interested in this book.” (D. L. Chester, ACM Computing Reviews, August, 2011)