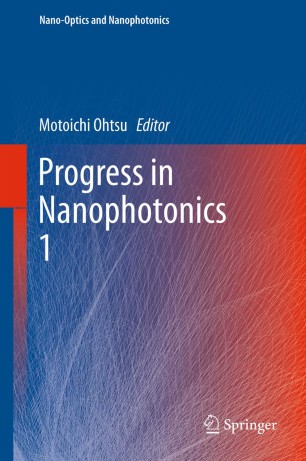 This book focuses on the recent progress in nanophotonics technology to be used to develop novel nano-optical devices, fabrication technology, and security systems. It begins with a review of the concept of dressed photons and applications to devices, fabrication, and systems; principles and applications. Further topics include: DNA process for quantum dot chain, photon enhanced emission microscopy, near field spectroscopy of metallic nanostructure, self-organized fabrication of composite semiconductor quantum dots, formation of metallic nanostructure, and nanophotonic information systems with security. These topics are reviewed by seven leading scientists. This overview is a variable resource for engineers and scientists working in the field of nanophotonics.

Motoiochi Ohtsu was appointed a Research Associate, an Associate professor, a Professor at the Tokyo Institute of Technology. From 1986 to 1987, while on leave from the Tokyo Institute of Technology, he joined the Crawford Hill Laboratory, AT&T Bell Laboratories, Holmdel, NJ. In 2004, he moved to the University of Tokyo as a professor. He has been the leader of the "Photon Control" project (1993-1998), the Kanagawa Academy of Science and Technology, Kanagawa, Japan), the "Localized Photon" project (1998-2003: ERATO,JST, Japan), "Terabyte Optical Storage Technology" project (2002-2006): NEDO, Japan), and "Near field optical lithography system" project (2004-2006: Ministry of Education, Japan),. He is concurrently the leader of the "Nanophotonics" team (2003-2009: SORST, JST, Japan), "Innovative Nanophotonics Components Development" project (2006-present: NEDO, Japan), and "Nanophotonics Total Expansion: Industry University Cooperation and "Human ResourceDevelopment" project (2006-present: NEDO, Japan).

He has written over 417 papers and received 87 patents. He is the author, co-author, and editor of 55 books, including 22 in English.

He is an executive director of the Japan Society of Applied Physics. His main field of interests is nanophotonics.

Awards: 14 prizes from academic institutions, including the Issac Koga Gold Medal of URSI in 1984, the Japan IBM Science Award in 1988, two awards from the Japan Society of Applied Physics in 1982 and 1990, the Inoue Science Foundation Award in 1999, the Japan Royal Medal with a Purple  Ribbon from the Japanese Government in 2004, H. Inoue Award from JST in 2005, the Distinguished Achievement Award from the Institute of Electronics, Information and Communication Engineering of Japan in 2007, the Julius Springer Prize for Applied Physics in 2009.