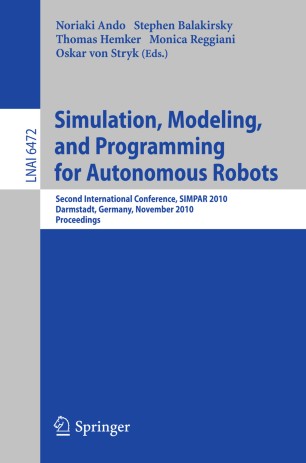 Why are the many highly capable autonomous robots that have been promised for novel applications driven by society, industry, and research not available - day despite the tremendous progress in robotics science and systems achieved during the last decades? Unfortunately, steady improvements in speci?c robot abilities and robot hardware have not been matched by corresponding robot performance in real world environments. This is mainly due to the lack of - vancements in robot software that master the development of robotic systems of ever increasing complexity. In addition, fundamental open problems are still awaiting sound answers while the development of new robotics applications s- fersfromthelackofwidelyusedtools,libraries,andalgorithmsthataredesigned in a modular and performant manner with standardized interfaces. Simulation environments are playing a major role not only in reducing development time and cost, e. g. , by systematic software- or hardware-in-the-loop testing of robot performance, but also in exploring new types of robots and applications. H- ever,their use may still be regardedwith skepticism. Seamless migrationof code using robot simulators to real-world systems is still a rare circumstance, due to the complexity of robot, world, sensor, and actuator modeling. These challenges drive the quest for the next generation of methodologies and tools for robot development. The objective of the International Conference on Simulation, Modeling, and ProgrammingforAutonomous Robots (SIMPAR) is to o?er a unique forum for these topics and to bring together researchersfrom academia and industry to identify and solve the key issues necessary to ease the development of increasingly complex robot software.