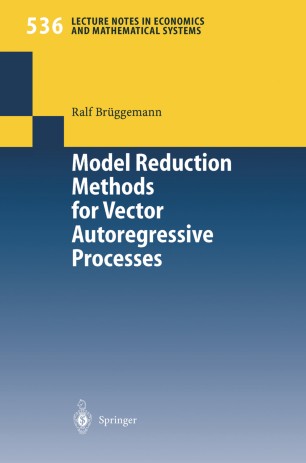 1. 1 Objective of the Study Vector autoregressive (VAR) models have become one of the dominant research tools in the analysis of macroeconomic time series during the last two decades. The great success of this modeling class started with Sims' (1980) critique of the traditional simultaneous equation models (SEM). Sims criticized the use of 'too many incredible restrictions' based on 'supposed a priori knowledge' in large scale macroeconometric models which were popular at that time. Therefore, he advo­ cated largely unrestricted reduced form multivariate time series models, unrestricted VAR models in particular. Ever since his influential paper these models have been employed extensively to characterize the underlying dynamics in systems of time series. In particular, tools to summarize the dynamic interaction between the system variables, such as impulse response analysis or forecast error variance decompo­ sitions, have been developed over the years. The econometrics of VAR models and related quantities is now well established and has found its way into various textbooks including inter alia Llitkepohl (1991), Hamilton (1994), Enders (1995), Hendry (1995) and Greene (2002). The unrestricted VAR model provides a general and very flexible framework that proved to be useful to summarize the data characteristics of economic time series. Unfortunately, the flexibility of these models causes severe problems: In an unrestricted VAR model, each variable is expressed as a linear function of lagged values of itself and all other variables in the system.