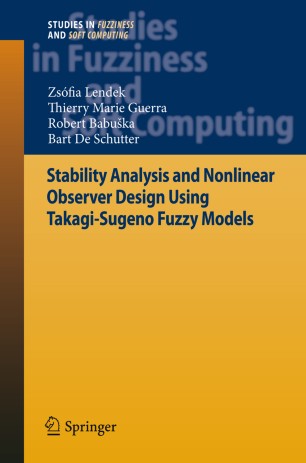 Part of the Studies in Fuzziness and Soft Computing book series (STUDFUZZ, volume 262)

Many problems in decision making, monitoring, fault detection, and control require the knowledge of state variables and time-varying parameters that are not directly measured by sensors. In such situations, observers, or estimators, can be employed that use the measured input and output signals along with a dynamic model of the system in order to estimate the unknown states or parameters. An essential requirement in designing an observer is to guarantee the convergence of the estimates to the true values or at least to a small neighborhood around the true values. However, for nonlinear, large-scale, or time-varying systems, the design and tuning of an observer is generally complicated and involves large computational costs.

This book provides a range of methods and tools to design observers for nonlinear systems represented by a special type of a dynamic nonlinear model - the Takagi-Sugeno (TS) fuzzy model. The TS model is a convex combination of affine linear models, which facilitates its stability analysis and observer design by using effective algorithms based on Lyapunov functions and linear matrix inequalities. Takagi-Sugeno models are known to be universal approximators and, in addition, a broad class of nonlinear systems can be exactly represented as a TS system. Three particular structures of large-scale TS models are considered: cascaded systems, distributed systems, and systems affected by unknown disturbances. The reader will find in-depth theoretic analysis accompanied by illustrative examples and simulations of real-world systems. Stability analysis of TS fuzzy systems is addressed in detail. The intended audience are graduate students and researchers both from academia and industry. For newcomers to the field, the book provides a concise introduction dynamic TS fuzzy models along with two methods to construct TS models for a given nonlinear system.

For additional information, see the book website at http://www.dcsc.tudelft.nl/fuzzybook/