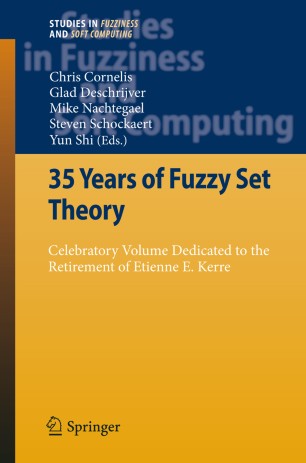 Celebratory Volume Dedicated to the Retirement of Etienne E. Kerre

Part of the Studies in Fuzziness and Soft Computing book series (STUDFUZZ, volume 261)

This book is a tribute to Etienne E. Kerre on the occasion of his retirement on October 1st, 2010, after being active for 35 years in the field of fuzzy set theory. It gathers contributions from researchers that have been close to him in one way or another during his long and fruitful career. Besides a foreword by Lotfi A. Zadeh, it contains 13 chapters on both theoretical and applied topics in fuzzy set theory, divided in three parts: 1) logics and connectives, 2) data analysis, and 3) media applications. The first part deals with fuzzy logics and with operators on (extensions of) fuzzy sets. Part 2 deals with fuzzy methods in rough set theory, formal concept analysis, decision making and classification. The last part discusses the use of fuzzy methods for representing and manipulating media objects, such as images and text documents. The diversity of the topics that are covered reflect the diversity of Etienne's research interests, and indeed, the diversity of current research in the area of fuzzy set theory.