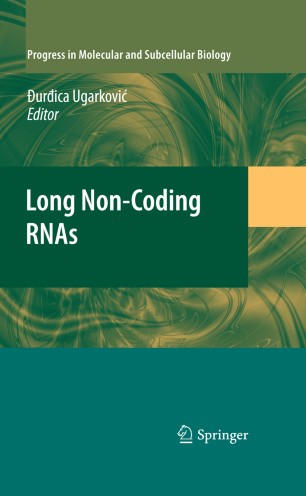 Part of the Progress in Molecular and Subcellular Biology book series (PMSB, volume 51)

Long non-coding RNAs (lncRNAs), tentatively defined as ncRNAs of more than two hundred nucleotides in length, are characterized by the complexity and diversity of their sequences and mechanisms of action. Based on genome-wide studies, more than 3,300 of them exist, but to date only the limited number of functional lncRNAs have been identified and characterized. Nonetheless, lncRNAs have emerged as key molecules involved in the control of transcriptional and posttranscriptional gene regulatory pathways. They take part in the recruitment of chromatin modifying complexes and regulate splicing, localization, stability and translation of the target mRNAs.

This book provides an overview of the rapidly advancing field of long ncRNAs, describing the epigenetic and non-epigenetic mechanisms by which they regulate various biological functions in model systems, from yeast to mammals. The role of ncRNAs in sex chromosome dosage compensation in flies and mammals is described, as well as their role in centromere and telomere biology. Long non-coding RNAs involved in environmental stress response and development are presented and their mechanisms of action discussed.