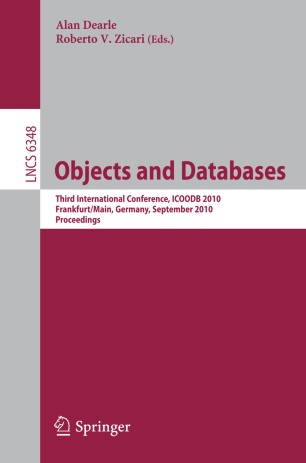 AccordingtoFrancoisBancillonandWonKim[SIGMODRECORD,Vol.19,No. 4, December 1990], object-oriented databases started in around 1983. Twen- seven years later this publication contains the proceedings of the Third Inter- tional Conference on Object-Oriented Databases (ICOODB 2010). Two questions arise from this – why only the third, and what is of interest in the ?eld of object-oriented databases in 2010? The ?rst question is easy – in the 1980s and 1990s there were a number of conferences supporting the c- munity – the International Workshops on Persistent Object Systems started by Malcolm Atkinson and Ron Morrison, the EDBT series, and the International Workshop on Database Programming Languages. These database-oriented c- ferences complimented other OO conferences including OOPSLA and ECOOP, but towards the end of the last century they dwindled in popularity and ev- tually died out. In 2008 the First International Conference on Object Databases was held in Berlin. In 2009 the second ICOODB conference was held at the ETH in Zurich as a scienti?c peer-reviewed conference. What is particular about ICOODB is that the conference series was est- lished to address the needs of both industry and researcherswho had an interest in object databases, in innovative ways to bring objects and databases together and in alternatives/extensions to relational databases. The ?rst conference set the mould for those to follow – a combination of theory and practice with one day focusing on the theory of object databases and the second focusing on their practical use and implementation.