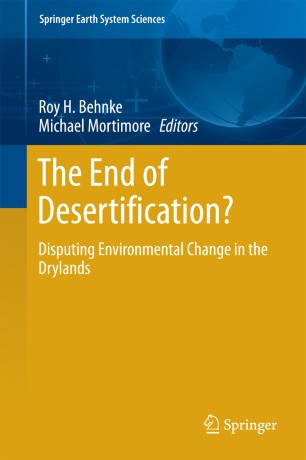 The End of Desertification?

Disputing Environmental Change in the Drylands

The question in the title of this book draws attention to the shortcomings of a concept that has become a political tool of global importance even as the scientific basis for its use grows weaker. The concept of desertification, it can be argued, has ceased to be analytically useful and distorts our understanding of social-environmental systems and their resiliency, particularly in poor countries with variable rainfall and persistent poverty. For better policy and governance, we need to reconsider the scientific justification for international attempts to combat desertification.
Our exploration of these issues begins in the Sahel of West Africa, where a series of severe droughts at the end of the 20th century led to the global institutionalization of the idea of desertification.  It now seems incontrovertible that these droughts were not caused primarily by local land use mismanagement, effectively terminating a long-standing policy and scientific debate. There is now an opportunity to treat this episode as an object lesson in the relationship between science, the formation of public opinion and international policy-making.
Looking beyond the Sahel, the chapters in this book provide case studies from around the world that examine the use and relevance of the desertification concept. Despite an increasingly sophisticated understanding of dryland environments and societies, the uses now being made of the desertification concept in parts of Asia exhibit many of the shortcomings of earlier work done in Africa. It took scientists more than three decades to transform a perceived desertification crisis in the Sahel into a non-event. This book is an effort to critically examine that experience and accelerate the learning process in other parts of the world.