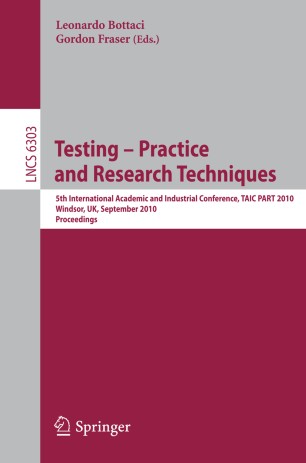 A Message from the TAIC PART 2010 General Chair TAIC PART is a unique event that strives to combine aspects of a conference, a workshop and a retreat. Its purpose is to bring together industrialists and academics in an environment that promotes fundamental collaborationon pr- lems in software testing. Among the wide range of topics in computer science andsoftwareengineering,softwaretesting is anidealcandidatefor academicand industrialcollaborationbecauseadvancesinresearchcanhavesuchwide-ranging and far-reaching implications for industry. Conversely, the advances in comp- ing and communications technology and the growth of the associated software engineering activity are producing new researchchallengesat an increasing rate. The problems that arise in software testing are related to the problems that ariseinmanyotherareasofcomputing.Assuch,testingresearchcombinesawide range of elements encompassing the theoretical work of program analysis and formal methods and the associated representations such as ?nite-state machines and dependence graphs. The inherent complexity of software testing has led to the involvement of heuristic methods. Software testing is also a human activity and has thus seen the involvement of psychology,sociologyand even philosophy. This astonishing breadth and depth have made the problems of software testing appealing to academics for several decades.