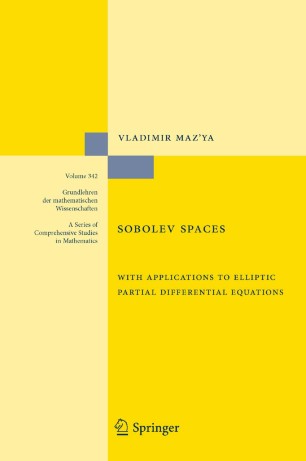 Sobolev spaces play an outstanding role in modern analysis, in particular, in the theory of partial differential equations and its applications in mathematical physics. They form an indispensable tool in approximation theory, spectral theory, differential geometry etc. The theory of these spaces is of interest in itself being a beautiful domain of mathematics. The present volume includes basics on Sobolev spaces, approximation and extension theorems, embedding and compactness theorems, their relations with isoperimetric and isocapacitary inequalities, capacities with applications to spectral theory of elliptic differential operators as well as pointwise inequalities for derivatives. The selection of topics is mainly influenced by the author’s involvement in their study, a considerable part of the text is a report on his work in the field. Part of this volume ﬁrst appeared in German as three booklets of Teubner-Texte zur Mathematik (1979,1980). In the Springer volume “Sobolev Spaces”, published in English in 1985, the material was expanded and revised. The present 2nd edition is enhanced by many recent results and it includes new applications to linear and nonlinear partial differential equations. New historical comments, five new chapters and a signiﬁcantly augmented list of references aim to create a broader and modern view of the area.