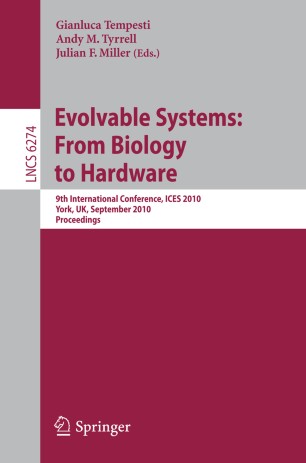 Evolvable Systems: From Biology to Hardware

Biology has inspired electronics from the very beginning: the machines that we now call computers are deeply rooted in biological metaphors. Pioneers such as Alan Turing and John von Neumann openly declared their aim of creating arti?cial machines that could mimic some of the behaviors exhibited by natural organisms. Unfortunately, technology had not progressed enough to allow them to put their ideas into practice. The 1990s saw the introduction of programmable devices, both digital (FP- GAs) and analogue (FPAAs). These devices, by allowing the functionality and the structure of electronic devices to be easily altered, enabled researchers to endow circuits with some of the same versatility exhibited by biological entities and sparked a renaissance in the ?eld of bio-inspired electronics with the birth of what is generally known as evolvable hardware. Eversince,the?eldhasprogressedalongwiththetechnologicalimprovements and has expanded to take into account many di?erent biological processes, from evolution to learning, from development to healing. Of course, the application of these processes to electronic devices is not always straightforward (to say the least!), but rather than being discouraged, researchers in the community have shown remarkable ingenuity, as demostrated by the variety of approaches presented at this conference and included in these proceedings.