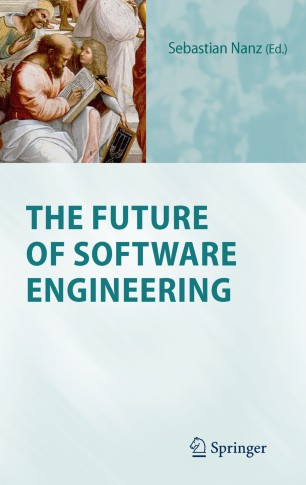 The Future of Software Engineering

This book focuses on defining the achievements of software engineering in the past decades and showcasing visions for the future. It features a collection of articles by some of the most prominent researchers and technologists who have shaped the field: Barry Boehm, Manfred Broy, Patrick Cousot, Erich Gamma, Yuri Gurevich, Tony Hoare, Michael A. Jackson, Rustan Leino, David L. Parnas, Dieter Rombach, Joseph Sifakis, Niklaus Wirth, Pamela Zave, and Andreas Zeller. The contributed articles reflect the authors‘ individual views on what constitutes the most important issues facing software development. Both research- and technology-oriented contributions are included. The book provides at the same time a record of a symposium held at ETH Zurich on the occasion of Bertrand Meyer‘s 60th birthday.

Sebastian Nanz is a postdoctoral researcher at ETH Zurich, with main interests in concurrency, programming languages, and verification. He graduated with M.Sc. degrees in computer science and mathematics from Technische Universität München in 2002 and 2004, and obtained his Ph.D. degree in computer science from Imperial College London in 2006. Before joining ETH Zurich in 2009, he also worked as a researcher at the Technical University of Denmark, Microsoft Research Cambridge, and Yale University.