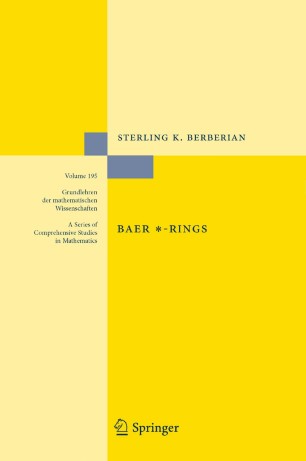 A systematic exposition of Baer *-Rings, with emphasis on the ring-theoretic and lattice-theoretic foundations of von Neumann algebras. Equivalence of projections, decompositio into types; connections with AW*-algebras, *-regular rings, continuous geometries. Special topics include the theory of finite Baer *-rings (dimension theory, reduction theory, embedding in *-regular rings) and matrix rings over Baer *-rings. Written to be used as a textbook as well as a reference, the book includes more than 400 exercises, accompanied by notes, hints, and references to the literature. Errata and comments from the author have been added at the end of the present reprint (2nd printing 2010).

A.C. Mewborn 1972 in Zentralblatt für Mathematik, 242.Band, p. 97: "This book is a systematic exposition of Baer*-rings, i.e. rings with involution in which every annihilator one-sided ideal is generated by a projection. In some respects it is an extension of I. Kaplansky’s book “Rings of operators” […]. The study of Baer*-rings is motivated primarily by certain kinds of algebras of linear operators on a Hilbert space and by certain aspects of lattice theory. This book has some of the flavor of both of these but the treatment is almost entirely algebraic. Motivating examples from operator algebras are used extensively. The book is divided into three parts. The first part is a general discussion of *-rings with various conditions on the partially ordered set of projections. The second part is devoted to the structure of Baer *-rings, including the decomposition into types (Types I, II, III, and finite and infinite). Part III occupies about one half of the book and is devoted to the study of finite Baer*-rings (x*x=1 implies x x* = 1). Chapter 6 introduces the notion of a dimension function and shows that every finite Baer *-ring satisfying a generalized comparability condition for projections has a unique dimension function. Chapter 7 contains a representation of a finite Baer *-ring as a subdirect product of finite Baer *-factors. The last two chapters are devoted to the construction of a 'regular hull' of a finite Baer *-ring satisfying certain conditions and to the study of matrix rings over Baer *-rings. This book is well-written and suitable for use both as a text and as a reference on the subject of Baer *-rings. It contains a large number of excellent exercises and problems of varying degrees of difficulty, including a number of open problems."