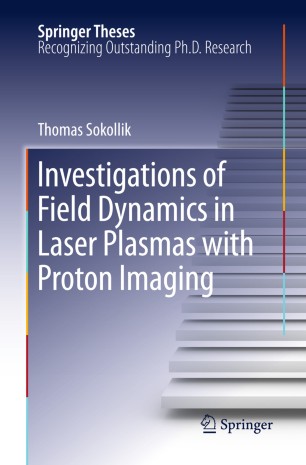 Investigations of Field Dynamics in Laser Plasmas with Proton Imaging

Laser driven proton beams are still in their infancy but already have some outstanding attributes compared to those from conventional accelerators. One such attribute is the typically low beam emittance. This allows excellent resolution in imaging applications like proton radiography. In the thesis by Thomas Sokollik a novel imaging technique - the proton streak camera - was developed and first used to measure both the spatial and temporal evolution of ultra-strong electrical fields in laser-driven plasmas. Such investigations are of paramount importance for the understanding of laser-plasma interactions and, thus, for optimization of laser driven particle acceleration. In particular, the present work investigated micrometer-sized spherical targets after laser irradiation. The confined geometry of plasmas and fields was found to influence the kinetic energy and spatial distribution of accelerated ions. This could be shown both in experimental radiography images and and in numerical simulations, one of which was selected for the cover page of Physical Review Letters.