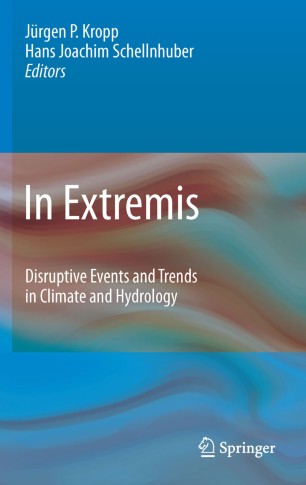 Disruptive Events and Trends in Climate and Hydrology

The book addresses a weakness of current methodologies used in extreme value assessment, i.e. the assumption of stationarity, which is not given in reality. With respect to this issue a lot of new developed technologies are presented, i.e. influence of trends vs. internal correlations, quantitative uncertainty assessments, etc. The book not only focuses on artificial time series data, but has a close link to empirical measurements, in order to make the suggested methodologies applicable for practitioners in water management and meteorology.

Dr. J. Kropp: Senior scientist at PIK; he studied chemistry and physics and in 1992 he took a diploma in theoretical chemistry at the University of Oldenburg. His doctoral thesis in theoretical physics was on Neural Networks and Qualitative Knowledge Bases in Environmental Systems Analysis. From 1993-1998 he was research fellow at PIK, from 1998-2001 project leader of a research project on costal zone management (Data integration and Qualitative Dynamics in the Wadden Sea) at the Institute for Chemistry and Biology of the Marine Environment (University of Oldenburg), and from 2001 research analyst and member of staff of the German Advisory Council on Global Change to the Federal Government (WBGU). He was a member of an expert council on New Concepts and Indicators in Fisheries and Aquaculture invited by the European Commission/DGXII and a contributor to the WBGU reports Transition to sustainable energy systems and special report Charging the global commons, and project leader of the international joint project Scaling Analysis of Hydrometeorological Time Series at the University of Giessen, Institute for Theoretical Physics. During 1999-2002 he was the PI for an integrated vulnerability assessment for the German state government of North-Rhine Westphalia. His research interests are the development of methods for integrated impact assessments, in particular, with respect to vulnerability, risk assessment, and adaptation to climate change and in the context of decision making and various institutional settings. Amongst the research project he leads are Uncertainty, Prediction and Risk Assessment of Extreme Events (UPRACE) and Development of Policies and Adaptation Strategies to Climate Change in the Baltics (ASTRA) which is of particular interest for the suggested project. For the latte he was awarded with the Amber Tree Award of the European INTERREG Office for the outstanding vision of the project bringing together various disciplines.He worked for the Council of Europe developing guideline for strengthening the adaptive capacity of European Societies with respect to climate change. For the German Society for Technical Cooperation he developed a climate proofing concept for the assessment of development programmes with regard to climate change. He leads several European joint projects (e.g. disaster and risk assessment) and has published numerous papers and is one editor of the books Science of Disasters: Climate Disruptions, Heart Attacks, and Market Crashes (Springer, 2002) and Advanced Methods for Decision Making and Risk Management in Sustainability Sciences (Nova Sci. Publ., 2007). Prof. Dr. H.J. Schellnhuber: Born in 1950 in Ortenburg (Germany). Training in physics and mathematics with a at the University of Regensburg. Doctorate in Theoretical Physics in 1980. Various periods of research abroad, in particular at several institutions of the University of California system (USA). Habilitation (German qualification for professorial status) in 1985, then Heisenberg Fellowship. 1989 Full Professor at the Interdisciplinary Centre for Marine and Environmental Sciences (ICBM) at the University of Oldenburg, later Director of the ICBM. 1991 Founding Director of the Potsdam Institute for Climate Impact Research (PIK); since 1993 Director of PIK and Professor for Theoretical Physics at the University of Potsdam. 2001-2005 additional engagement as Research Director of the Tyndall Centre for Climate Change Research and Professor at the Environmental Sciences School of the University of East Anglia in Norwich (UK). Distinguished Science Advisor for the Tyndall Centre since 2005. 2002 Royal Society Wolfson Research Merit Award; 2004 CBE (Commander of the Order of the British Empire) awarded by Queen Elizabeth II. Elected Member of the Max Planck Society, the US National Academy of Sciences, the Leibniz-Sozietät, the Geological Society of London, and the International Research Society Sigma Xi. Ambassador for the International Geosphere-Biosphere Programme (IGBP). Visiting Professor in Physics, Honorary Member of the Christ Church College High Table, and Senior James Martin Fellow at Oxford University. Active service on some dozen national and international panels for scientific strategies and policy advice on environment & development matters. Inter alia, Vice-Chair of the German Advisory Council on Global Change (WBGU), Chair of the Global Change Advisory Group for the 6th Framework Programme of the European Commission and Member of the corresponding panel for FP7, Member of the Scientific Board of the Dahlem Conferences, Member of the Committee on Scientific Planning and Review of the International Council for Science (ICSU), Member of the Board of the Stockholm Environment Institute (SEI). Chief Government Advisor on climate and related issues for the German G8-EU twin presidency in 2007.