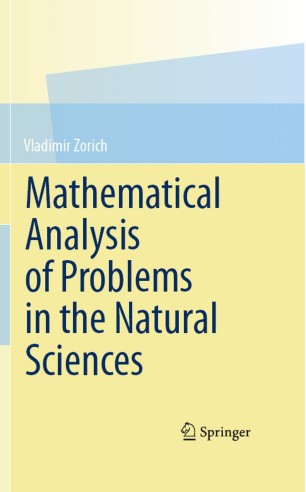 Mathematical Analysis of Problems in the Natural Sciences

Vladimir A. Zorich is a distinguished Professor of Mathematics at the University of Moscow who solved the problem of global homeomorphism for space quasi-conformal mappings and provided its far-reaching generalizations. In Mathematical Analysis of Problems in Natural Sciences, he uses a lively and accessible style to unify three topics of analysis and physics, which are as follows: the dimensional analysis of physical quantities, which contains various applications including Kolmogorov's model for turbulence; functions of very large numbers of variables and the principle of concentration along with the non-linear law of large numbers, the geometric meaning of the Gauss and Maxwell distributions, and the Kotelnikov-Shannon theorem; and, finally, classical thermodynamics and contact geometry, which covers two main principles of thermodynamics in the language of differential forms, contact distributions, the Frobenius theorem and the Carnot-Caratheodory metric. This text corresponds to a two-semester course aimed at illustrating various interactions of "pure mathematics" with other sciences such as hydrodynamics, thermodynamics, statistical physics and information theory. It includes a nice set of problems and contains many historical remarks. It also contains an appendix featuring Zorich's popular article, "Mathematics as language and method." It is ideal for students and professors of mathematics and physics but is also relevant to chemists and biologists as well as engineers and researchers in various areas of the natural sciences.