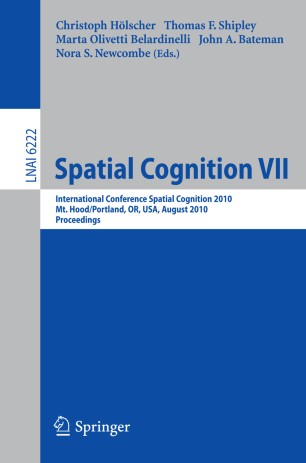 This is the seventh volume of a series of books on fundamental research in spatial cognition. As with past volumes, the research presented here spans a broad range of research traditions, for spatial cognition concerns not just the basic spatial behavior of biological and artificial agents, but also the reasoning processes that allow spatial planning across broad spatial and temporal scales. Spatial information is critical for coordinated action and thus agents interacting with objects and moving among objects must be able to perceive spatial relations, learn about these relations, and act on them, or store the information for later use, either by themselves or communicated to others. Research on this problem has included both psychology, which works to understand how humans and other mobile organisms solve these problems, and computer science, which considers the nature of the information available in the world and a formal consideration of how these problems might be solved. Research on human spatial cognition also involves the application of representations and processes that may have evolved to handle object and location information to reasoning about higher-order problems, such as displaying non-spatial information in diagrams. Thus, work in s- tial cognition extends beyond psychology and computer science into many disciplines including geography and education. The Spatial Cognition conference offers one of the few forums for consideration of the issues spanning this broad academic range.