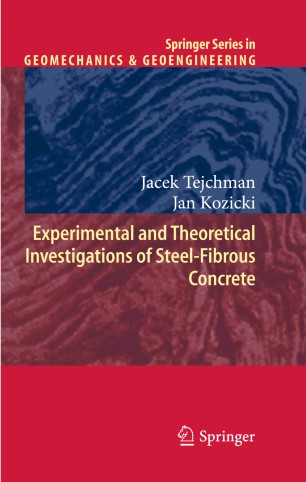 Concrete is still the most widely used construction material since it has the lowest ratio between cost and strength as compared to other available materials. However, it has two undesirable properties, namely: low tensile strength and large brittleness that cause the collapse to occur shortly after the formation of the first crack. To improve these two negative properties and to achieve a partial substitute of conventional reinforcement, an addition of short discontinuous randomly oriented steel fibres can be practiced among others. In spite of positive properties, fibrous concrete did not find such acknowledgment and application as usual concrete. There do not still exist consistent dimensioning rules due to the lack sufficient large-scale static and dynamic experiments taking into account the effect of the fibre orientation. The intention of the book is twofold: first to summarize the most important mechanical and physical properties of steel-fibre-added concrete and reinforced concrete on the basis of numerous experiments described in the scientific literature, and second to describe a quasi-static fracture process at meso-scale both in plain concrete and fibrous concrete using a novel discrete lattice model. In 2D and 3D simulations of fibrous concrete specimens under uniaxial tension, the effect of the fibre volume, fibre distribution, fibre orientation, fibre length, fibrous bond strength and specimen size on both the stress-strain curve and fracture process was carefully analyzed.