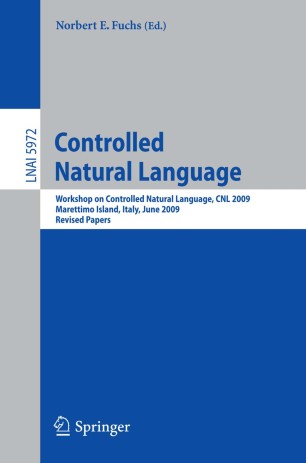 Controlled natural languages (CNLs) are subsets of natural languages, obtained by - stricting the grammar and vocabulary in order to reduce or eliminate ambiguity and complexity. Traditionally, controlled languagesfall into two major types: those that - prove readability for human readers, and those that enable reliable automatic semantic analysis of the language. [. . . ] The second type of languages has a formal logical basis, i. e. they have a formal syntax and semantics, and can be mapped to an existing formal language, such as ?rst-order logic. Thus, those languages can be used as knowledge representation languages, and writing of those languages is supported by fully au- matic consistency and redundancy checks, query answering, etc. Wikipedia Variouscontrollednatural languagesof the second type have been developedby a n- ber of organizations, and have been used in many different application domains, most recently within the Semantic Web. The workshop CNL 2009 was dedicated to discussing the similarities and the d- ferences of existing controlled natural languages of the second type, possible impro- ments to these languages, relations to other knowledge representation languages, tool support, existing and future applications, and further topics of interest.