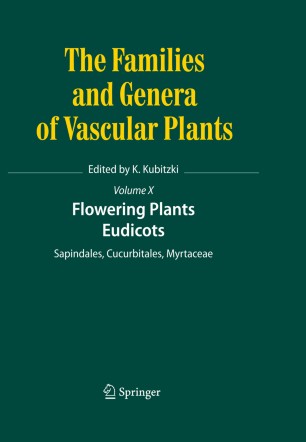 Part of the The Families and Genera of Vascular Plants book series (FAMILIES GENERA, volume 10)

This volume, the tenth in the series, comprises modern treatments for the families and genera of the eudicot orders Sapindales and Cucurbitales. The circumscription of the orders, families and genera conforms to the most recent systematic studies. The family treatments include descriptions of the families and the genera, genera classification keys, discussions of relationships and data on their morphology, reproductive biology, distribution, ecology and economic importance. Sapindales and Cucurbitales, as understood in this volume, comprise 16 families with 637 genera and roughly 9,240 species. Sapindales include large tropical and southern temperate tree families such as the Anacardiaceae, Sapindaceae (these in the modern circumscription, which includes Aceraceae and Hippocastanaceae), Meliaceae and Rutaceae, which have long been considered to be closely related. Cucurbitales represent a relatively new ordinal concept; apart from some small woody groups, the order contains two large families, Cucurbitaceae and Begoniaceae, which are predominantly, and likely basically, herbaceous. A detailed treatment of the tropical and southern temperate woody family Myrtaceae (itself comprising 142 genera and 6,700 species) is an addendum to the treatment of the Myrtales inVol. IX of this series.