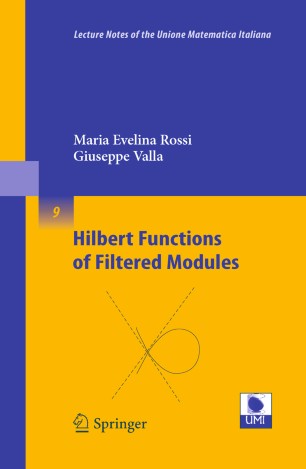 Hilbert functions play major parts in Algebraic Geometry and Commutative Algebra, and are also becoming increasingly important in Computational Algebra. They capture many useful numerical characters associated to a projective variety or to a filtered module over a local ring. Starting from the pioneering work of D.G. Northcott and J. Sally, we aim to gather together in one book a broad range of new developments in this theory by using a unifying approach which yields self-contained and easier proofs. The extension of the theory to the case of general filtrations on a module, and its application to the study of certain graded algebras which are not associated to a filtration are two of the main features of this work. The material is intended for graduate students and researchers who are interested in Commutative Algebra, particularly in the theory of the Hilbert functions and related topics.

“This book’s first aim is to gather together in one place many new developments of the theory of Hilbert functions by using a unifying approach of filtrations of submodules. In this way, the book not only extends many well-known results … but it also gives self-contained and easier proofs of even classical results. … This is a short but very nice book. It is useful for graduate students and researchers who are interested in the theory of Hilbert functions.” (Lê Tuấn Hoa, Mathematical Reviews, Issue 2012 b)

“The authors introduce and discuss the notion of a good q-filtration of a module over a local ring. … The authors give several upper bounds for the first two Hilbert coefficients of the Hilbert polynomial of a filtration … . This is an interesting and well written lecture note.” (Siamak Yassemi, Zentralblatt MATH, Vol. 1201, 2011)