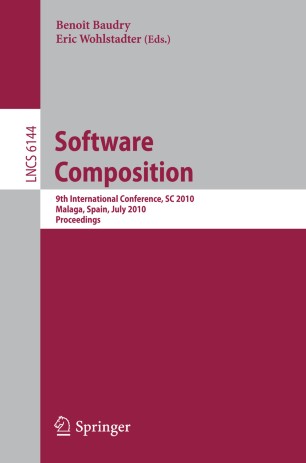 The goal of the International Conference on Software Composition is to advance the state of research on modularity and reuse in the context of software development based on components, services, features, or models. Software composition is becoming more and more important as innovation in software engineering shifts from the development of individual components to their reuse and recombination in novel ways. To this end, for the 2010 edition, researchers were solicited to contribute on topics such as component adaptation techniques, composition languages, modeling, as well as emerging composition techniques such as aspect-oriented programming, servi- oriented architectures, and mashups. In line with previous editions of SC, contri- tions were sought focusing on both theory and practice, with a particular interest in efforts relating them. This LNCS volume contains the proceedings of the 9th International Conference on Software Composition, which was held during July 1–2, 2010, as a collocated event of the TOOLS 2010 Federated Conferences, in Malaga, Spain.