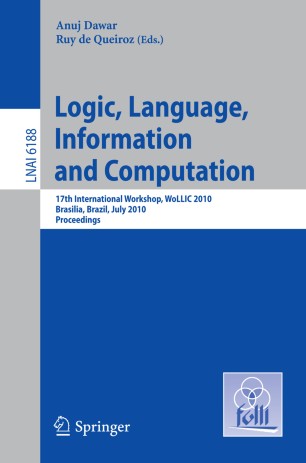 This volume contains the papers presented at WoLLIC 2010: 17th Workshop on Logic, Language, Information and Computation held during July 6–9, 2010, on the campus of Universidade de Bras´ ?lia (UnB), Brazil. The Workshop on Logic, Language, Information and Computation (WoL- LIC) is an annual event, meeting every year since 1994, which aims at fostering interdisciplinary research in pure and applied logic. The idea is to have a forum which is large enough in the number of possible interactions between logic and the sciences related to information and computation, and yet is small enough to allow for concrete and useful interaction among participants. The present volume contains 13 contributed papers that were selected from among 32 submissions after a rigorous review by the Program Committee. Each submission was reviewed by at least two, and on average three, Program C- mittee members. This volume also containspapersor abstractsthat relateto the seven invited talks presented at the workshop. Between them, these papers give a snapshot of some fascinating work taking place at the frontiers between computation, logic, and linguistics. We are grateful to all the people who made this meeting possible and are responsible for its success: the members of the Program Committee and the external reviewers, the invited speakers, the contributors, and the people who were involved in organizing the workshop.